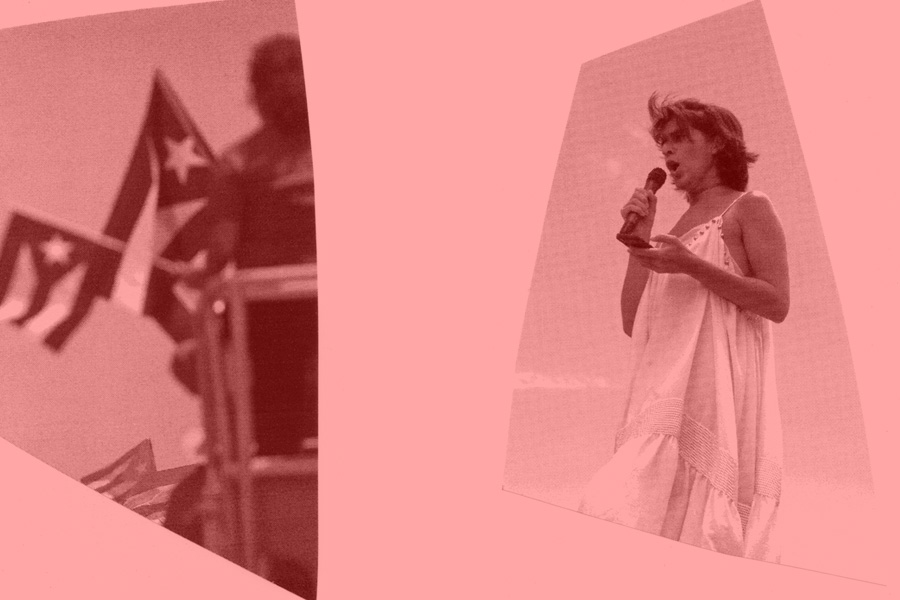 On Tuesday, July 23, Puerto Rico was two weeks into a hot summer full
of drums, dancing, hand-painted signs, and flags. Crowds chanted viva Puerto Rico libré all day and all night. City streets were occupied and government buildings covered with graffiti. Y no es vandalismo (“no it’s not vandalism”) rang out against the streets, a line from the the protest anthem recorded the week before by iLe, Residente, and Bad Bunny titled “Afilando los cuchillos” (“Sharpening the Knives”). The real vandalism was not the graffiti covering the buildings but the government officials inside them. And the crowds of people who wanted them to resign grew each day. Police had begun teargassing a week earlier. The day before Las Americas highway had been taken. The governor had not yet resigned.

A few blocks away a crowd of a few hundred loosely associated leftists gathered outside an anarchist venue, El Hangar en Santurce. Among
them was twenty-six-year-old María José. With shoulder-length dark hair and a dancer’s way of moving through the world, María had been taking
the streets with thousands in San Juan for the last two weeks. The day before, she had filmed a video of herself in a bikini top with pink-and-yellow feathers bouncing over her shoulders. She wore dramatic, blue eye shadow and bright red lipstick. In the clip, she looks provocatively into the camera, does a sexy nipping gesture with her mouth, then sticks her tongue out. When she posted it on her Instagram profile, she wrote, “These images were taken last Monday night. I climbed a fence and from there I could see how so many people looked at me with strangeness, confusion, shame, and complication. Being a trans and non-binary person makes my struggle difficult because I fight surrounded by people who don’t understand me on a fundamental level (even people on the left).”

Later, someone commented on her Instagram post that “‘this is not the time to speak about LGBT issues.’” It was this comment that inspired María to wake up early the next morning, Tuesday, July 23. She took some time to herself in her apartment. And she sat down to write a speech in response.

Later in the day, she climbed on top of a truck parked near the gathering of the “loose left.” A friend handed her a microphone. She wore a long white dress and a red ribbon around her neck, and the wind blew through her hair and her dress, both waving like a flag. She began:

By the end of her speech some people were crying. Someone told her she was a dream come true. She posted later that night, “A Libra dream: to be on top of a bus, your favorite dress flowing in the air, giving a speech demanding justice for all.”

Others, she noted, when we spoke with her via video chat, remained resistant. “I’m trying to humanize myself in front of a crowd of people which doesn’t necessarily see me as human,” she told us. “If I didn’t give myself that moment no one would give it to me . . . People wanted me to get down. They didn’t want to listen to a trans person speak.”

María was born in 1992, and grew up in Puerto Rico, in Caguas. She left to go to college in the US and was in New York when Hurricane Maria hit the island. But her family was there in Puerto Rico. And her community was there. And when we spoke with her, she mentioned that even before the hurricane, she knew she wanted to come back to fight for trans and non-binary rights. But the hurricane brought her back sooner rather than later.

Hurricane Maria, which hit the island on September 20, 2017, would by the end of the year be responsible for 4,600 deaths. Most of the island was without power or clean water for months. And while the hurricane is not the cause of the recent protests, the governmental dysfunction and corruption that the hurricane exposed played a significant role in the recent uprising.

The hurricane also looms large in everyone’s consciousness. The rain comes and goes all the time in Puerto Rico, but heavy rains are full of anxieties. “It gets very intense,” María said. “There’s very real PTSD with heavy rain.”

María told us how she invited a group of feminists to her apartment a week after her speech. She said the word “feminist” with a long sssss and then she laughed. She had called the meeting because she respected the feminists and their interventions. Recently some of them had sat in front of the capitol building with duct tape over their mouths. They had written renuncia on the tape. This had caught María’s attention and she thought the intervention was important. “Cis women go through a hell of a lot of violence. Especially cis women of color,” she told us. “And I never want to take the focus away from them.” And yet, she called the meeting because she felt that the feminism of this movement could not be a feminism of the past. “If you want to be the bitch on Vice or whatever big news channel you better be fighting for black women and trans and nonbinary people,” she explained.

It started to rain in the middle of the meeting and the rain did not let up. Eventually the electricity went out. And there was a silence. Then a few minutes later the power came back and they went on with their conversation. As María put it, this conversation became about what it means “to be cunty cunty” and how “we need a new feminism on the table.”

María talks a lot about the new feminism she wants and how we can’t have a feminism of the past. Her version of new feminism takes its cue from House of Grace, a core collective of six trans, nonbinary, and queer people. “I’m the mother of a house,” she told us, clutching her chest with a wide-stretched smile. “My house is my real family.”

María’s own mother is the only person in her biological family to whom she’s still connected. As she spoke of her mother, tears started to form in her eyes, and she shuffled through some drawers for photographs. Most of her family had an adverse response to her transition. “They’re toxic.” Her mother supported her, however, and ultimately “brought me to the surface,” as María explained, finally recovering the photographs for us. They were mother-daughter portraits. “It’s from 2015 . . . She did my makeup. We had to tell my father to leave. She had to make sure all the doors in the house were locked.”

But, as she reiterates, “My house is my real family.”

House of Grace goes to protests together. They eat meals every so often. They have a WhatsApp group. “But I wish it was a strip club at night so we could be sexy and make money, because all of my kids are working shitty jobs,” she told us. Her hopes for the future, however sexy, seem somehow modest. “We are just trying to have the basics,” she says, nothing extravagant.

We asked her about the shitty jobs she’s had to do. She waitressed for a while. After some time she started getting fewer and fewer hours. She felt like she was doing the job above and beyond but there was still hostility and discomfort she had to get past every day when she showed up. Eventually she was let go. “Then I worked at a Hot Topic in the mall. It was horrible,” she cringed. On the last day a customer asked, “are you a man or a woman?” while she was working the register, and then the rest of the line stared at her. As she thought back on the experience, she closed her eyes, shaking her head. “I broke down and started crying . . . My manager told me I should go.”

After that she worked in a kitchen run by a trans man. In the kitchen she felt more comfortable. But the pay wasn’t great. This is what it’s like for everyone in House of Grace, and María counts herself as one of the very fortunate among them. Often she opens her apartment to people who need a secure and safe place to stay. Last week it was an immigrant whose mother wants to go to the US. “This person has this hard job that barely pays her bills, and on top of that she is trying to process a personal situation. These things are really heavy. On her. On us.”

María dreams about a day when they have “some way to make [their] own coin” together and just get their needs met, so they can spend the rest of their time in the streets, meetings, and dancing. As she puts it, “This political moment has stalled a lot of our plans. We have a ball coming up. Where we live out our queer fantasy in the midst of the apocalypse.”

This story continues. The day after María’s speech, the governor resigned. The protests and the meetings and the utopian families and the complicated alliances continue. María put it this way: “Tomorrow we are supposed to have a different governor. So I have to go protest tomorrow.” María hardly paused when we spoke to her. She was running at high speed. A few times, we caught her pausing, and maybe it seemed like too much. What would happen tomorrow? And the next day?

The day before we talked, María wrote a poem about these questions titled, “Dónde estás, Revolución?” (“Where are you, Revolution?”)

Where are you, Revolution,
that I can’t find you?
I’ve looked for you outside
and also deep within.
Above the riot
of moments I confuse
and beneath the paving stones
where we saw the end of the world.

It is never clear to anyone in these moments of street protest if they can be the one, if they can go to revolution or not. These moments come and go with the rain. Just like the rain, more will come. Just like the rain, at moments the electricity will go off and there will be silence. And when the electricity comes back on, who will get to speak? María repeatedly
pondered the hard questions in our conversation: “What is this revolution? Is it a revolution even?” At different points she seemed to think so.

A few hours after María gave her speech on the truck that Tuesday afternoon, it started to rain again. And then it began to pour. “A million people plus got wet together,” she recollected with a smile. “The queers were dancing disco. We had a big circle, and danced under the rain. And it felt like a revolution in that moment.”