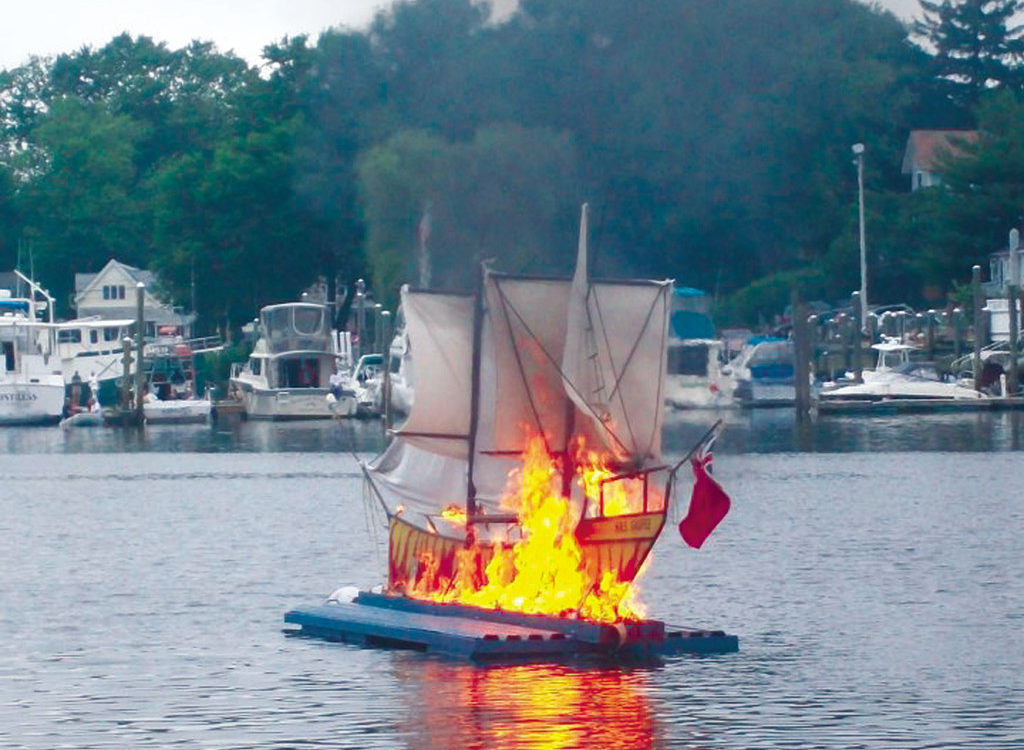 The fireworks of the Fourth of July commemorate a slave republic that still deserves to burn.

Forty-one of the fifty-six signers of the Declaration of Independence owned slaves. In the rare instances where US history acknowledges this fact, slave ownership by the Founding Fathers is presented as hypocrisy, an embarrassing inconsistency in the American Revolution’s otherwise admirable quest to expand human liberty. But for most of these men, slave ownership was not a moral blind spot within an otherwise liberatory panorama, but an entirely consistent aspect of their belief in an independent, white-supremacist settler state. While the American Revolution had a variety of motivations, the preservation of slavery and the business of slavery was a key issue in elites’ drive for independence. In response to this conservative mutiny, enslaved people led a simultaneous and often divergent revolution for emancipation, one that leaves us a truer legacy of a fight for freedom than that we celebrate on July 4.

The events of the revolution turned, in some sense, upon the plight of a single person. James Somerset was an enslaved man living in Boston, Massachusetts when British customs officer Charles Stewart purchased him and eventually brought him to London. In England, Somerset fled bondage in 1771, though he was soon recaptured and imprisoned on a ship bound for a Jamaican sugar plantation. Somerset’s family, working closely with London abolitionist networks, put in an application for a writ of habeas corpus on Somerset’s behalf and forced the British courts to evaluate whether Somerset’s imprisonment and planned removal were legal. In 1772, Lord Chief Justice Mansfield made the momentous ruling that British law did not positively protect slavery, and so Somerset was set free.

The exact meaning of Lord Mansfield’s ruling continues to be debated. Some interpret it as effectively freeing all slaves within England itself, others as more narrowly prohibiting masters from forcibly taking enslaved people outside of England. Many would continue to be enslaved in England for decades, but in the months and years following the decision, thousands left their masters and claimed their freedom. Regardless of the legal details, then, here was James Somerset, an enslaved man who won his freedom through his escape and thereby enabled countless others to emancipate themselves. The Somerset case terrified elites across the British empire, who feared an imminent ruling banning slavery in the West Indies and mainland North America. Such a decision wouldn’t come until 1833, but in planters’ fervid imaginations, British power had fallen into the hands of radical abolitionists.

The press in the thirteen American colonies raged against the Somerset decision. Forty-three stories appeared in twenty colonial papers, warning colonists of the potential for the British Parliament to tax slaves or even ban slavery altogether. Ads for runaway slaves reported that slaves had fled for England, inspired by Mansfield’s ruling. For southerners especially, Somerset was a dramatic escalation of British tyranny. Parliament’s subsequent failure to act to preserve slavery after Mansfield’s decision was definitive proof that Britain had no interest in protecting its colonies’ economic interests.

Colonists dreaded the loss of economic and political power that would come with emancipation, but they also harbored deep fears of slave rebellions, which they felt the British were ignoring or encouraging. Enslaved people had led a constant campaign against human bondage in the Americas during the seventeenth and eighteenth centuries, from the 1739 Stono Rebellion, to the 1741 New York Conspiracy, to Tacky’s War in 1760 Jamaica. Anglo-Protestant settlers were furious that the Crown did not take more serious measures to quell these rebellions, angered that England failed, for instance, to fully destroy Spanish Florida, which they saw as key in enabling the Stono Rebellion. Colonists imagined the British were colluding with enslaved people and free indigenous people to subjugate the interests of Anglo-Protestant expansion to a corrupted and increasingly heterogenous empire. Britain’s Proclamation Line of 1763, which banned settlement west of the Appalachian Mountains in a concession to indigenous resistance, further confirmed the Crown’s treachery. Settlers prominently expressed those concerns in the Declaration of Independence, which lists as one of its prime grievances, “[England] has excited domestic insurrections amongst us, and has endeavoured to bring on the inhabitants of our frontiers, the merciless Indian Savages whose known rule of warfare, is an undistinguished destruction of all ages, sexes and conditions.”

Virginia’s planter elite depended on exports to Great Britain for their plantation produced goods, and so had only tepidly supported the protests and economic boycotts of the 1760s. Now, facing Somerset, the possible taxation or confiscation of their most valuable property, and potential rebellion, they united in opposition to the Crown. In 1773, these planters led the formation of the Committees of Correspondence, the precursors to the Continental Congress, and became leaders in agitation against England. Thus the wealthiest colony announced it was ready to fight, and the others followed suit, quickly escalating protests after the lull of the early 1770s.

While southerners had the most obvious economic incentive to protect slavery, they were not alone in their concern over potential British-led abolition. By 1770, all thirteen colonies had populations of enslaved people. In addition to the slaves they personally held, elites in the North Colonies built their wealth on shipping, setting up vast networks that, among other functions, supplied the slave plantations in the West Indies with necessary goods. Merchants traded with the British Caribbean, but also smuggled their goods to and from French, Dutch, and Spanish colonies. These supply networks enmeshed the North Colonies in slavery and rendered them dependent upon the enormous wealth created by West Indian slave societies. Some of this entanglement was second-order, but many traders also became directly involved in the slave trade. Many of these merchants were based in Rhode Island, moving goods and enslaved people between New England, the coast of Africa, and the Caribbean, a pattern called the Triangular Trade, given the location of the three sites in the Atlantic. Over the eighteenth century, Rhode Islanders alone transported some one hundred thousand enslaved people.

These traders held an obvious interest in maintaining the profitable business of slavery. When the British moved to combat smuggling and enforce taxes with policies like the Sugar Act of 1765 which specifically targeted the molasses that New Englanders turned into rum, then exchanged, in turn, for slaves—elites led protests throughout the north. Perhaps the most instructive example is the Gaspee Affair of 1772, whereby Rhode Islanders burned the British customs ship Gaspee and shot its captain in retaliation for the confiscation of multiple cargoes of rum. Men like John Brown, Simeon Potter, and Abraham Whipple led the attack, all of whom were directly invested in the West Indies and the slave trade. This was the first blood drawn by colonists in their anti-British protests, a direct reaction to Britain’s regulation of the business of slavery.

Subsequent British investigation into the affair sparked fears of British oppression among colonists, directly inspired the creation of the Committees of Correspondence, and gave rise to one of the most popular revolutionary pamphlets, John Allen’s “An Oration on the Beauties of Liberty.” The famous Boston Tea Party, occurring the next year in 1773, was also bankrolled by wealthy merchant and slave-owner John Hancock, who knew cheap British tea would put his tea-smuggling enterprise out of business.

While some revolutionaries believed in abolition—notably the many people of color who participated in anti-British protests and riots across the north—most of the elites who would lead the revolution were united in part by a desire to preserve slavery. Events during the war itself, primarily the actions of tens of thousands of enslaved people, provide a profound illustration of the forces at work.

Black soldiers volunteered to fight on the American side from the very beginning. But out of a fear that former slaves would turn their guns on the Americans, as well as an economic interest in keeping enslaved people at work, Patriot elites sought to limit or prohibit the service of people of color. In November 1775, the Continental Congress ruled that blacks were fully ineligible to serve, a policy that was maintained through 1778. Later in the war, the policy was relaxed out of a need for troops. In 1778, Rhode Island raised its First Regiment, largely made up of black and indigenous men, only to ban black enlistment again later that year in the face of opposition from slave owners. When the Continental Congress ordered South Carolina to raise a regiment of black soldiers from its large slave population, the state refused, choosing instead to use most of its small militia to patrol the countryside and prevent slaves from joining the British. In all, some five thousand to ten thousand black soldiers served the American cause.

The British, acting out of the military pragmatism required by an expeditionary war, more fully embraced the service of black soldiers. When Lord Dunmore, the last Royal Governor of Virginia, issued his proclamation in 1775 declaring that any enslaved people who crossed over to British lines would be granted their freedom, it triggered a mass emancipation movement. Thousands of enslaved people—mostly men, but also a significant number of women and children—left plantations and joined the British, first in Virginia, then throughout North America. Lord Dunmore created a special uniform for what became known as the Ethiopian Brigade, embroidering their shirts with the slogan “Liberty to Slaves.” The numbers are difficult to estimate, but somewhere between thirty thousand and on hundred thousand enslaved people likely gained freedom either by reaching British lines, or by escaping beyond the grasp of either military power. They included men like Colonel Tye, a former slave from northern New Jersey, who led guerrilla brigades of escaped slaves against Patriot plantations to free slaves and steal or destroy property.

Loyalist leaders severely mistreated black soldiers and families, throwing them into horrific camps or suicidal actions during the conflict, and afterwards re-enslaving many under Loyalist masters in the West Indies. Some British commanders, though, followed through on the promise of freedom demanded by black soldiers and oversaw the resettlement of thousands of formerly enslaved people in Jamaica, East Florida, London, and, notably, Nova Scotia. While the Patriots were attempting to negotiate the return of escaped slaves in the Treaty of Paris, formerly enslaved people and their allies were realizing a hard-won mass emancipation.

In the American Revolution, we see the divergence of struggles by elites and struggles by enslaved people. Historians differ on how exactly to interpret these divergences: Gerald Horne called the Patriot cause a counterrevolution against the revolt of enslaved people over the course of the eighteenth century. Others like Alan Gilbert see two separate revolutions converging and diverging in places, but in conflict more often than not. Whatever the exact framework, it’s clear we need a new remembering of American Independence, one that both exposes the true motivations of the founders of the United States and fully praises the enslaved people who waged a real fight for freedom on North American soil.